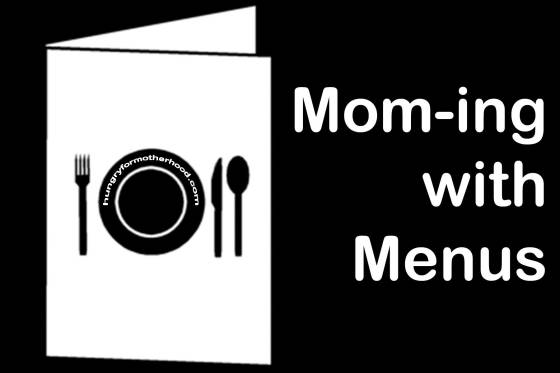 It’s not rocket science or reinventing the wheel, but recently I’ve been getting hella into monthly menu planning. March was/is crazy. I had a pledge drive at my 9-5 job, and Gibs turned 2 years old halfway through the month. Family came in from out of town. So I decided to sit down and plan out EVERYTHING.  And the menu has really helped me eat out less and cook more. It’s also rewarding to set out a plan at the beginning of the month and watch myself accomplish it. After I cook a meal, I scratch a satisfying X through that day.

A quick Google search got me to FreePrintableGroceryList.com where I snagged this great Word document menu. Highly recommend. Would download again. 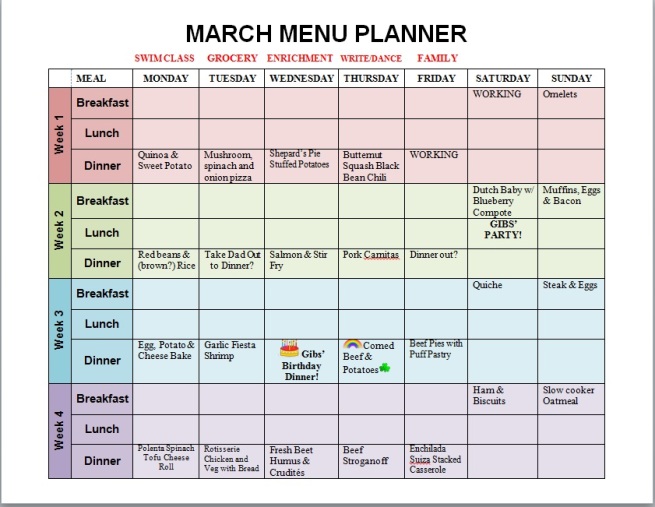 I only filled out the meals that I’m home to cook. Which is basically just dinner during the week and breakfast on the weekends. But even this has really allowed me to figure out what works for us and even start some healthy patterns in our diets.

Since Gibs started eating solids, I’ve wanted to be that nutritionist level of mother who makes sure her son gets the perfect combination of fresh fruits and proteins, etc. I think most parents feel that way.

But I also live in the real world. We have P-I-Z-Z-A (you have to spell it out or the baby will know what’s up) way more often than I think anyone would recommend. And the kid apparently also has his own opinions on food too. Who knew I’d have to factor that part in at some point? So when we’re not ordering Chinese delivery (Gibs loves lo mein,) I’m working from this menu planner. And I’d say I’ve stuck with it 80% of the time at least.

At the top of each day, I’ve added a line that describes the main goal of the evening. On Mondays it’s swim class for Gibs. We go to the grocery store on Tuesdays usually. Wednesday, I want to make sure I do some kind of activity with Gibs- art or music or just playing outside. I also attempt to hit the gym on Wednesday- but I can be pretty fluid about that. Thursday, I try to enrich myself with dance class (Yes! I’m trying to get back into bellydance) or writing with a friend. And Friday evenings are the only day we’re all home together at the same time so I try to dedicate that night to the family.

With all the goals set out for each day, I wanted to make sure every meal fits in with that activity. And incorporate some healthy eating aims while I’m at it. I knew I wanted to do one vegetarian meal a week. Mondays are when I have the most energy, so I planned to make veggie meals then. Having a cool website like Meatless Monday to reference has helped a lot with that too.

And Thursday is the day I’ll have the least amount of time due to attempting self-actualization, so I knew I wanted to make all Thursday dinners in my crockpot. You know what makes that even better- almost no clean up thanks to slow cooker liners! They are really life savers for those of us with no time to soak and scrub the crock after cooking a meal. And I think that’s pretty much all of us. I’d buy them in bulk if they were offered that way. But in a 4 pack, that’s enough for a month of slow cooker meals.

Then I tried to factor in holidays and special events. In March we had St. Patrick’s Day and Gibs’ birthday. I thought Easter was in April this year which is why it’s not on the calendar above. Can’t be Mary Poppins Practically Perfect all the time.

After considering all those things, I chose meals that took the least amount of time, tasted the best to me and maybe included a few new food items Gibs hadn’t tried yet. In April, I want to add another factor: fish once per week. So Tuesdays will involve seafood in some way.

By the way, did you guys know they make “instant” quinoa? There are so many healthy time-savers now!

Here’s a few of my favorite recipes from March.

Butternut Squash Black Bean Chili
This one was a real favorite of mine. I thought it wouldn’t have any substance, but it was practically meaty!

Shepherd’s Pie Potato Skins
I had to ask my husband to put the potatoes in the oven before I got home from work so they would be cooked through in order to stuff when I got home. But it was a big hit with him and a very hearty meal for everyone.(I used lamb instead of beef)

Chicken Enchilada Suiza Stacked Casserole
This one is a classic in our house. I even have a whole theory on tortilla layout.