Do you write? Do you ever write for contests? Would you like to? Am I asking too many questions? Have you already stopped reading? Why are you still here? Are you that dedicated to finishing this paragraph? Who are you anyway?

Back to the point, there’s a cool contest going on right now, and you still have five more chances to submit and win. And by win, I mean that your submission might be included as a chapter in a book. No cash or prizes. Only the satisfaction of a job well done.So yay?

I’m a glutton for potential publicity though so I jumped on board, and you can too. Here’s the rundown on the contest in video form.

And there’s a bunch of fun rules to read here.

So you HAVE to set up a WattPad account to submit your entry. But that’s OK. I have already taken the liberty of checking the platform out for you, and it’s actually pretty good. I’m like your royal food taster making sure you aren’t poisoned- if websites were food and writing was eating and you were a duchess, that is. Unless you are a duchess. In which case, I’d like a title of my own as well as a grant. Or an endowment. That’s fine too.

To begin, you read the first chapter of a story titled Freak Week. It’s a novella that you will continue in the time-honored, sleep-away camp tradition of passing a story to each other around the fire. And the world it’s set in is, well, freaky. So almost anything could happen in it. Anything you can write up!

So read chapter one and then decide if you want to jump on board this crazy train. I found it adorable and fun. Maybe you will too. And then you’ll want to continue the story like I did.

Because I can’t leave well-enough alone, here’s my submission for Chapter Two. It’ll only make sense if you read the first chapter. Actually, it still may not make sense even after that. But, I wrote it and by God I’m gonna post it. 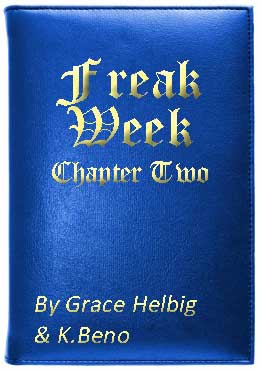 Day two dawned…well it didn’t dawn at all. I mean, I’m awake, and it’s still dark outside so I’m not certain if the sun is going to rise today. Since a soft drizzle of what appears to be tinsel is raining down on the already Shih Tzu-blanketed ground, catching sprays of light from the meteor shower above, I’m honestly okay with no sunrise today. I daresay that day two of Freak Week is kinda lovely. Maybe even… romantic.

Yes, Robo-D, I can already feel my emotions going completely haywire. I admit to being a drama queen with angst-filled episodes of awkward self-loathing. So for me to think I’m spiraling into complete diva-dom is saying something. And all while my crush, Crush, lays only a few feet away on the basement floor with his back turned to the group.

Ugh! I’m still cringing from today’s interaction with him. You see, after we all woke up on the hard basement floor, we started thinking about how we would fare over the next several days. So Mr. Kevin tried to organize teams to look for provisions.

“Alright, Marmalade. You and Jessic….”

“Okay. Will you and Marmalade…”

“Right,” Mr. Kevin replied, completely off his game, “will you two…”

“You know, now that I think about it, I want to be referred to as Jelly. But let’s spell it G-E-L capital E,” Gel-E née Marmie née Marmalade cut the teacher off mid-sentence.

“I like that! And you know what’s even less gender-binary than Banana? Plantain. Would you tell a plantain which bathroom they should use? I don’t think so, ” Plantain, previously known as Banana, elaborated.

“Ladies!” Mr. Kevin announced louder than was necessary. “I’m asking you to….”

Gel-E held up one finger to indicate that she would turn her attention back to him in a moment before opening her mouth to continue her conversation on the intricacies of naming conventions, at which point the teacher fell to his knees and began screaming melodramatically. It was like something out of a black & white movie I vaguely remember watching.

“ELEANOR! You two-timing thief of hearts! I’ll be your Nancy! Why? Oh why?!”

And that was the end of Mr. Kevin’s participation in the organizing efforts. Harry attempted to step in, at the encouragement of his posse. Freak Week was apparently starting to affect him too because he could barely speak after brazenly stepping into the middle of our circle of stranded students.

“You have hair,” Harry announced to me.

“Right,” Harry lowered his pointed finger and shuffled back to the pack of boys who high-fived him for his observation.

As I knew she would, Gel-E spoke up adopting the stance of a general addressing the troops, “Alright. It’s going to be at least six more days of this chaos. I don’t expect you to all make it. Some of you will crumble like Mr. Kevin. Some of you will undoubtedly take your chances outside after having confrontations with your comrades. But some of you will make it. And you’ll thank me for that when Freak Week ends.”

“Actually, I think I’m going to stick with Banana.”

Dropping the military-esque demeanor, Gel-E said, “You know, I think I’m going back to Marmie too. Though I absolutely reserve the right to drop my first album under the name Gel-E.”

With that settled, Marmie set us up in teams of two to begin searching the school for supplies. Guess who she paired up with me? So Crush and I set out to find blankets and pillows because there’s nothing more awkward and potentially socially disastrous than being in close company to your crush while finding the makings of sleeping arrangements.

“Um, I guess we should check the main office first?” I said with that stupid lilting question mark sound on the end of a statement that I hate to hear other girls use.

“Solid plan,” Crush replied with a soft smile that I’ve seen umpteen times in my dreams.

I stared into those deep brown eyes and ogled the way his cheeks rounded as he smiled. Dimples. God, he has dimples.  What would he do if I just grabbed that gorgeous face and kissed him? I must have been leaning in too close because Crush’s eyes clouded with confusion and a hint of panic. The kind of fear I see on the face of my cat when he figures out we’re going to the vet’s office.

Shaking my head to clear it, I gave Crush a hard look as if it were his fault that I’d lost my concentration and turned on the spot to head upstairs. Unfortunately, Freak Week converted my turn into a spinning fouetté  followed by a  low plié into a glissade leap and ending in fifth position at the bottom of the stairs. I wouldn’t even turn around to look at Crush, I was so mortified. Until he fluttered to a stop next to me with his leg stretched behind him in first arabesque.

“Started ballet when I was 6,” Crush explained.

I smiled, “You make it look good.”

Crush barked like a dog and hopped up the stairs. This at least saved me from having to follow up that comment. We made our way to the office slowly because every few steps I would start walking on my tip toes. Crush would bound around me in circles on all fours until I could manage to walk flat-footed again.  Freak Week can be a real pain.

There were no pillows or blankets in the office, but we gathered all the softest things we could find in the lost and found box to take back with us. Wayward sweaters and abandoned hoodies overflowed out of the containers we carried back to the basement. A trail of scrunchies, hair bands and scarfs fell behind us from the boxes as we walked.

“Assuming there’s still a planet to live on next year, what do you want to do after you graduate?” Crush broke the silence that had fallen after his barking had stopped.

“I still really don’t know yet. College seems like the logical choice. But it would be kinda cool to see more of the world before it completely burns itself out,” I replied jerking my head to indicate the window which showed that the Shih Tzu storm had stopped and butterflies were now hovering perfectly in place as if they all hung from heaven’s beaded curtains.

The first licks of a guitar song rang through the air. A power love ballad if the opening chords were to be believed. The music was coming from behind us, and we turned to see that the hair bands from lost and found had turned into actual 1980’s metal hair bands playing instruments and walking behind us. It was like those roving musicians in fancy restaurants who come to your table, setting the mood for romance. Freak Week was out to destroy me with awkward anxiety, obviously.

The rest of the day passed slowly in the basement. We attempted to play that game where you act out a movie or phrase, but with all the Freak Week twitches we had, it was nearly impossible to decipher the player’s intention. Eventually, the group fell silent as we chewed the candy bars Harry had brought back after breaking the vending machine in the gym.

I thought maybe Crush was looking at me a couple times, but he never approached me to chat. It’s going to be a long week if I’ve already made Crush uncomfortable with, what I’m sure is, my obvious longing. So I’ll just sit here with my package of generic chocolate candy pieces and watch the tinsel rain until something else weirder happens. And it most assuredly will.

One thought on “Writing with Grace”