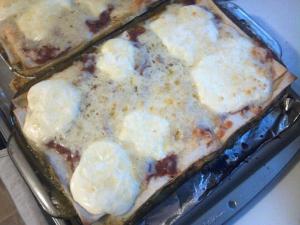 Click the picture for a link to the recipe.

You guys.  You guys, seriously.  This recipe was super good: one of my favorite casseroles that I have ever made.  However, I haven’t made it since October 2012 because it’s pretty labor intensive.  The next time I make it, I’m going to make a bunch to freeze as well so all the hard work is done at once.  And all the payoff happens at my leisure.  😀

Now don’t hate on the girl from rural Tennessee.  I had no idea what a tomatillo was before trying this recipe.  But I want points for already knowing what a poblano was.

Now once I TASTED the tomatillo, I knew that I had, at some point previous, eaten something containing it.  And I also want to say that I love the flavor all on it’s own.  The only word coming to mind to describe it is, bright.

It really is a great lively flavor that reminds me a tiny bit of citrus but also nothing at all like citrus.  Also some green tomato qualities, but not at all as well.  So you know, it tastes like itself and nothing else.  And I highly recommend you try cooking with tomatillos too.

So, I stole this recipe from the good folks at Food Network courtesy of Rachael Ray.  At first I thought she tried to slip this into her show, 30 Minute Meals.   I’m here to tell you, this is not a meal you can prepare in 30 minutes.  I was relieved to see that I wasn’t going to have to start a petition to get this recipe reclassified and that the recipe was featured in her show, Rachael Ray’s Week in a Day.

Since it’s not my original recipe, I won’t be adding my HFM moniker to the front of the title like I’ve done for other recipes.  However, I do feel I have something to add to this recipe that improves it.  So with that said, I present to you:

HFM’s Technique for Layering Tortillas in a Casserole Dish

These are the three different ways we’ll use the tortillas:  whole, cut into half moons and cut into quarters.  Yes, I did spend about 40 minutes creating these schematics.  Might as well go for the whole enchilada, right? (You see what I did there?  You’re welcome.)

STEP TWO: Place another set of tortilla half moons against the shortest walls of your casserole dish. You may need one or two depending on the size of your dish.

STEP THREE: Cut some of your tortillas into quarters.  Place these in the four corners of your baking dish.

STEP FOUR: Now layer some of the whole tortillas right down the middle of your dish.  You may still have some small gaps, but they would be much larger if you tried to just put one layer of whole tortillas down every time you layered your stacked casserole.

Using the color coding for this visual aid kinda made it look like a stained glass window.  I like it.  Maybe when I have a dream house with an elaborate library, I’ll have stained glass windows made like these.  I’m already visualizing how they would look with late afternoon summer sunlight blasting through them.

OK, that is enough effort for one post.  I hope you try the recipe.  And if you use my tortilla layering technique, let me know if it worked for you.  And how you like the taste of tomatillos.