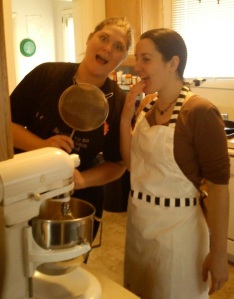 If you want to skip to the gist of the story, you can scroll down to the bolded lines about midway through this post

It was September 2011 when my husband agreed with me that we should have a baby.  I went off my birth control, and we started to work on the new project very casually.  No temperature charting, no ovulation prediction testing strips, really nothing more than noting the first day of my period on a calendar.

It was during our Christmas vacation when I thought we had accidentally succeeded.  My period was just so late.  But all the tests were negative.  Finally it did start- on Christmas Day.  You know, just to be a bitch I suppose.

After that raised and then dashed hope, my husband and I started TTC-ing (trying to conceive) in earnest January 2012.  My cycles were erratic.  I’d have a 40 day cycle, then a 28 day cycle and then something in the middle.  By May 2012 I was at my breaking point with myself.

Thankfully, it was about time for my annual pap smear.  The doctor listened to my woes but then told me that my irregular cycle was probably due to my excess weight.  In her opinion, extra fat caused more estrogen to be produced and that was throwing my cycles off.  But with my perfect blood pressure and no other ailments  (other than my rheumatoid arthritis) I insisted something else be done.

She said we should wait and see.  I did this for two more months.  Two more months in which I did not have a period at all.  It was at 50 days when I demanded my OBGYN (Obstetrician/Gynecologist) diagnosis me with something concrete and not just call me fat anymore.

So she begrudgingly sent me for a blood test– which came up fairly normal.  Probably just to get me out of her hair, she recommended I make an appointment with a reproductive endocrinologist.  She gave me the name of one she worked with.  I promptly chose another doctor at another hospital that had never associated with the hospital my OBGYN had worked for.  Because seriously, that woman can kiss my ass- my big fat extra estrogen producing ass.

By the time I was seen by my current reproductive endocrinologist, I was at the 70 day mark of having no period.  For some reason during my initial exam, which included a transvaginal ultrasound, the doctor actually manged to start my period right there on the table.  Not embarrassing at all.

So we started our rounds of Clomid, Femara, progesterone and Ovidrel right then.  September, October and November of 2012 were hellacious months in which my hormones ran rampant and our fears and hopes were raised and dashed repeatedly.  *Sigh*

Now, in the words of Bill Cosby,
I told you that story to tell you this one.

I wanted to tell you about my friend, Sarah.  Now, when we started this saga she was, of course, supportive.  But when we had to start the fertility treatments, I might have had a bit of a sob session with her. And she promised me this:

“If you don’t get pregnant this year, you get to have a date with me.”

So every time I would bemoan my barren state, she would remind me, “Hey, if it doesn’t happen we still get to have a fantastic date.”

And 2012 came and went.  I am still without child.  So last weekend, Sarah and I had our date.  We made it a brownie sundae and pizza Saturday.  And we may have followed that with some chocolate wine.  And some Easy Cheese and Chicken in a Biskit crackers.

And then we decided, while watching The Long Kiss Goodnight, that perhaps we needed to break open that bottle of tequila that was still about 3/4 full.

Because only a great friend will sit with you all day watching Teenage Mutant Turtles and eating pizza while doing shots of tequila and chasing that with Natty Boh.  And I have the proof!

Now, if you clicked on the last link I want to say, I stole those last lines from a comedy website I really enjoy, Cracked.com.  And this is the exact video I stole it from.  So you know, credit where credit is due.

So today is Tuesday, and Sarah and I are almost completely recovered from our weekend.  I’m still re-hydrating myself.  But we have put enough time between ourselves and our alcohol-soaked weekend that we can discuss the next time we will attempt to moderately poison ourselves again.

Sarah’s plan is, if we are still without a child by 2014, that we make it a ‘two bottle of tequila and trip to Vegas’ weekend.

But she finished her suggestion with this sentence that I have made my motto for 2013: “I have confidence in your uterus this year.”

And again, I agreed.

I said, “I think it’s got a lot of good things going for it.”

Then she said, “It sorta sounds like I’m threatening your liver if your uterus doesn’t cooperate.”

“It’s like you’re a Bond villain.  ‘We have ways of making you conceive,'” I responded.

Personally I think my liver can take the punishment.  But I’d rather my uterus shape up and fly right.  2013 has just started so it still has plenty of time to make a sincere effort to do what it was designed to do.  And I’m willing to relax more this year and give it an honest chance.

But I doubt I could be nearly as positive about the whole situation if it weren’t for my friends.  And all of my friends have been very supportive.  But Sarah was with me this weekend to follow through with a promise she made a year ago.

I hope anyone going through infertility has a Sarah in their lives.  I know I’m grateful to have her in mine.

3 thoughts on ““We Have Ways of Making You Conceive, Ms. Bond.””