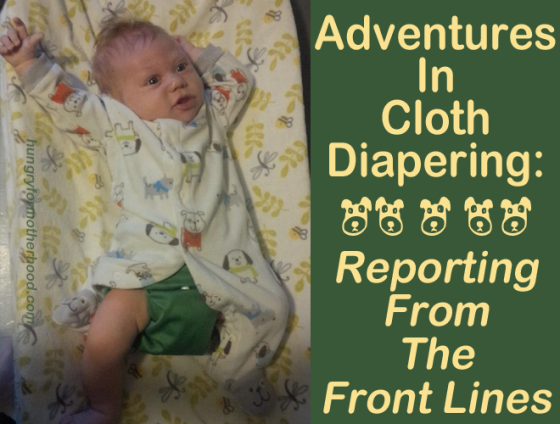 After a few months of heavy use, I wanted to write up a post about how we’re doing in our cloth diapering adventure. At almost the five month mark, I feel good about our investment in cloth diapers. But there is one new development that needs to be mentioned. When we first started cloth diapering, we bought 24 diapers. And this was a good call. Having this many diapers for a newborn worked out great. I was washing diapers maybe every two days.

However, I now have an infant. Not a newborn. And this little monster has a fully-functional digestive system. We went from washing two or three times a week to EVERY DAY! Just to keep him in clean diapers, The Man would wash the day’s diapers after Gibs went to bed. And I would stuff and prep the diapers before leaving for work the next morning.

Now that he’s almost five months, 24 diapers is not nearly enough. Even with pre-folds to stretch our stash, we were just not keeping up with demand. (I checked with the doc- Gibs doesn’t have a bladder infection on anything.)

Initially I took to the cloth diaper swap forums on Facebook. I thought we could pick up a few used diapers. Once they’re stripped and prepped, they would be just as good as our normal diapers. However, our first foray into this left a bad taste in The Man’s mouth. We work hard to maintain the water-proofing of our diaper liners. We use the right detergent, follow the manufacturer’s instructions and, most importantly, we don’t run the liners in the dryer. We let them lay flat to dry.

Well, not everyone takes care of their diapers the same way. I paid $5 per diaper for a couple used KawaiiBaby diapers on a forum. The seller said the diapers were in good condition. However, when you compare the liners to one of our diapers, you can see the water-proofing has completely disappeared. It’s just a de-laminated plastic-y feeling instead of the stiffer white PUL that you feel on my diapers.

Thankfully, this is not a total wash. Thanks to a friend’s experience with diapers de-laminating, she told me that I could use these diapers as swim diapers. Apparently, if you have a diaper that has lost its water-proof properties, you just leave the insert out and let baby wear it in the swimming pool. It’ll still contain any solid mess that might happen, but just like a normal swim diaper, it’s not water-proof. So if nothing else, I now have two new swim diapers and four extra micro-fiber inserts.

I was willing to try the forums again, but The Man decided that piecemeal-ing our stash from others’ used diapers wasn’t something he wanted to wait around on. Besides, you really can’t control how someone else takes care of their diapers. The next order could be just as disappointing.

So we decided to order more new diapers. KawaiiBaby offers package deals. Last time we ordered 24 diapers, but this time we decided we would do half that. So a week later, we had 12 extra diapers (including more of my favorite color- Dodger Blue.)

Unfortunately, having brand new diapers means that they need to be prepped just as we did the original diapers. And that’s a long-ish process. Basically the diapers need to be washed three times before we know for sure they are absorbent. This time we washed all the inserts along with the liners to stream-line the process. And luckily the colors of the diapers didn’t bleed (which is great since we decided it wasn’t worth the time to separate the brights and the darks this time.) The Man took on the job of prepping the diapers, and he did great!

So I guess to sum up, in my experience, you will need 24 diapers for baby when you bring him/her home. But you will need more like 36 diapers by the time kiddo is six months. And you should definitely have pre-folds as backups for the days when all the diapers in your stash are waiting to be washed.

I have a dozen pre-folds sized for a newborn. Even though my little monster is just about too big for them, I use the newborn pre-folds on Gibs’ activity mat when he needs some naked time (to air out diaper rash or just for kicks.) I spread the pre-folds out and let the urine fall where it may. And my mother always used to tell me that pre-folds are great for cleaning glass when they are no longer useful as diapers. However, I might try to re-sell them on the cloth diaper swap. After all- I can DEFINITELY vouch for how these diapers were taken care of. Maybe make back a little cash that I can turn around and re-invest into our stash.

Next diaper purchase will be yet more pre-folds. This time I’m going to give Green Mountain Diapers a try. I’ve heard nothing but good things about them from the forums. And of course, I’ll be reporting back. But that will be a few weeks from now.

2 thoughts on “Adventures in Cloth Diapering: Reporting From The Front Lines”