Yes, we are taking the plunge and investing in a stash of cloth diapers. We’ll accept the awards and accolades that I’m sure society will just pour upon us like a Gatorade cooler over the coach’s head at the end of the game.

You’re choosing to cloth diaper!
A winner is you!

It’s better for the environment, etc. etc. But I’m not going to lie to you, gentle readers. Ultimately, cloth diapering is CHEAPER to do for two to three years than disposable diapers. I do recycle though, if that gains me any environmental points back. But yes, the final push we needed was an economic one.

So I spent almost the entire weekend prepping cloth diapers. Because when they arrive in the mail, they aren’t ready to go on baby bums. They have various oils and such that need to be rinsed off the diapers before they can actually absorb the copious amount of baby waste they will eventually face down.

And prepping was a pain in the ass. So I figure, if I put that much time and energy into it, the process deserves to be documented. Prepare for a bunch of pictures, friends.

There are a lot of choices out there for cloth diapers. You have prefolds which are like the old school diapers your grandparents and great grandparents may have used. However, they still work and are really, really the cheapest possible option. Nowadays you can buy waterproof diaper covers for baby to wear over the prefolds, making this super economical. I wanted to have some prefolds on hand even though The Man most likely will stick with the pocket diapers we’ve purchased, which I will go into later.

I put unbleached, Indian cotton prefolds on my baby registry and received a dozen at my baby shower. 🙂 When they are brand new, they look like the picture below. However, prefolds are supposed to have a quilted look to them. In this un-prepped state, the diaper will repel moisture instead of absorb it. Since there was no bleaching process, the diapers have all the natural oils of the Indian cotton in them still. Well that just won’t do. 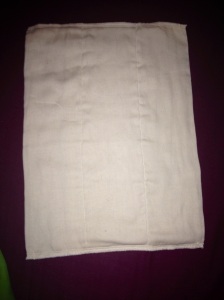 I combed the interwebs looking for instructions on how to prep prefolds. Opinions and processes abound. Ultimately, I decided that boiling the diapers and then washing them would make the most sense of all the combined data I had put together. So in two of my largest pots, I put four diapers into boiling water for 30 minutes at a time, stirring occasionally to make sure the diapers got boiled all around. My kitchen looked like a sauna. So if you do this, I recommend a fan or opening a window. That would have been much smarter of me.

Once all 12 diapers had their time in the pool, you can see all the oils that the diaper released into the boiling water. That would have kept the diaper from being absorbent. And I’m pretty sure that having faulty diapers would really erase my resolve to do this cloth diapering thing. Especially when I’m sleep deprived.

Oh you think you’re done? You’re not done. Not by a long shot. Though honestly, the boiling process only took an hour using two pots. The pocket diapers (which, again, are coming up later in this post) took me much longer. However, when the boiling is done you can already tell that the diapers have started to look more quilted. So you’re well on your way.

Prefold after boiling but before washing.

A word on detergent here before moving on. Apparently, diapers not only come to you in need of prep, they also need to be regularly maintained if they absorb too much detergent. The ingredients in normal detergents (whiteners, brighteners, scents, softeners, etc.) will build up on the diaper and cause them to lose absorbency. Or worse, begin to smell awful even fresh out of a wash. Some common detergent brands like Tide and All do make versions of their soap that do not contain these ingredients. But, at least for me, they are very hard to find! So we went back to the interwebs and found detergents made specifically for cloth diapers.

Rockin Green is probably one of the most well-known brands of cloth diaper detergents out there. I couldn’t find any locally, so I ordered it online. In theory, by using this detergent, we won’t have as much of a problem with detergent build up. Once Gibson’s here, and I’m washing diapers every other day, we’ll see. I will say that the detergent smells great in the bag. However, when the diapers came out of the wash, there was absolutely no scent of any kind. It was like smelling nothing. Which is strange, but I suppose that’s reassuring that there’s nothing left of interest in the fabric of the diaper.

Some folks even make their own diaper detergent. I couldn’t muster up the gumption to do it myself, but I hear they work great! And side note, apparently in cloth diapering circles, Bac-Out is like some kind of secret weapon. I intend to use it on the soiled diapers before tossing them into the diaper pail in the hopes that it will keep the diapers from staining. Some folks also add it to the wash. Or use it in a rinse or soaking cycle before washing the diapers. I haven’t tested it myself yet, but I believe the stories.

The diapers are now puffy and quilted. They also have shrunk a good bit. This is actually good because when I was practicing with these diapers before washing them, they were too big for my prop baby. Now they should fit Gibson perfectly. And absorb perfectly too. 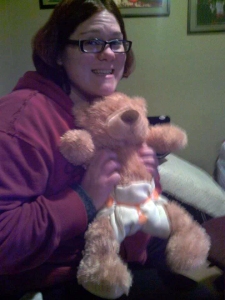 Okay, we’ve lost an entire Saturday night. But we have finished the prefolds. Now, Sunday morning dawns bright and early, and we must conquer… The Pocket Diapers.

A pocket diaper is very different from a prefold. For starters, they actually look like diapers. Or rather, they look more like the disposable diapers we are used to. They have tabs to hold the diapers on at the waist. They have fitted elastic around the legs. The colorful part of the diaper is actually a waterproof lining. And you put them on a baby much like you would a disposable. However, these diapers are WAY more customizable than disposables. You have lots of snaps that allow you to adjust the fit of the diaper. And the pocket in pocket diapers allows you to add one or more fabric inserts that give you more or less absorbency as you need it.

After lots and lots of research, the absolute cheapest pocket cloth diapers we could find online were Kawaii Baby diapers. The deal we got was 24 diapers and 48 inserts for around $125. Shipping was free but, it took a long time for the diapers to arrive. Glad we ordered when we did!

Thankfully, Kawaii Baby has a whole FAQ on how to prepare your new cloth diapers. But let me give you the short version. You’re going to wash your diapers at least three times before you can even consider using them. Thankfully, you don’t have to dry the diapers between each wash. This is what I did and take that for what it is: yet another opinion on the internet about how to prep cloth diapers.

Prepping Cloth Diapers Step One:
Warm wash with 1/4 the
normal amount of detergent

I started by turning all the diapers inside out and fastening the snaps. This SHOULD keep the colors of the liners from running and bleeding. As an extra precaution, I washed the dark and bright color diapers separately for this inaugural wash. (I won’t be doing that on a regular wash day.) Above, you can see the brights, snapped and inside out in the warm wash with 1/4 the normal amount of detergent. This was followed by a cold rinse. Then another wash, this time in cold water only, no detergent. Followed by a third and final wash in cold water without detergent.

The spin cycle gets a lot of the water out of the diapers. And because these are pocket diapers with removable absorbent inserts and not All-in-Ones, they dry much faster. (All-in-Ones or AIOs have the absorbent layer sewn into the diaper, making them thicker and taking longer to dry.) You could just lay these flat to dry with no other effort required, but the website does say that you can dry the diapers on a medium setting for up to 10 minutes. Any longer than 10 minutes or any higher than medium heat, and you risk melting the water proof lining. And that’s bad, m’kay?

All 26 of my assorted cloth diapers drying after prep.

After 10 minutes in the dyer, I laid the diapers flat on a table to continue drying. This would go faster outside in the sun, but not every day can be sunny. Additionally, when you lay these babies out in the sun, you will also brighten and bleach the white absorbent lining so you SHOULD try to do that periodically. But on a normal day, on the table in the basement will have to do.  ALSO- you shouldn’t line dry the diapers as the weight of a wet diaper fighting gravity might stretch out the elastic around the leg holes. And then you’ll be looking at possible leaks. Also bad, m’kay?

I made this a little harder and longer on myself by splitting up the diapers and inserts into different batches. But the extra time will be worth it because, in theory, the color of the diapers should now be set and not bleed during regular washings. If the future, I can wash the diapers right along with the inserts. I just didn’t this time because there are 48 inserts total, and I figured they deserved a wash all by themselves. Extra bonus, the inserts can be left all the way to complete dryness in the dyer. I kept them at medium heat and the flat inserts were completely dry after a full cycle.

Yes, it took me about five hours to finish all the washing thanks to having to run each of the three loads through three cycles plus drying time. But at the end of the day, I was able to stuff all the diapers with inserts and put them into our diaper storage cart. I can’t tell you how pleased I am to see them just sitting there, ready for the baby.

All prepped and waiting!

One final thing: diaper sprayers. I hear newborns who are exclusively breast fed usually have fairly easy-to-clean-up poos. However, that doesn’t mean you won’t eventually need some horsepower to clean off a stinky diaper. (WOOT double negative!) I bought the Triple 8 FLO Diaper Sprayer. And though we haven’t used it for its intended purpose yet, I just want to inform you that it has some kick! My husband felt that some of the pieces were a bit “cheap” feeling when he installed it. However, it hasn’t leaked or caused a problem yet. 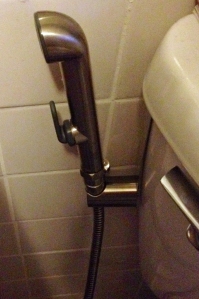 Diaper sprayer has THE POWER!

I was not compensated by any of the companies I linked to
or mentioned in the above post.
I only included them because they are part of the process I used.

15 thoughts on “Adventures in Cloth Diapering”