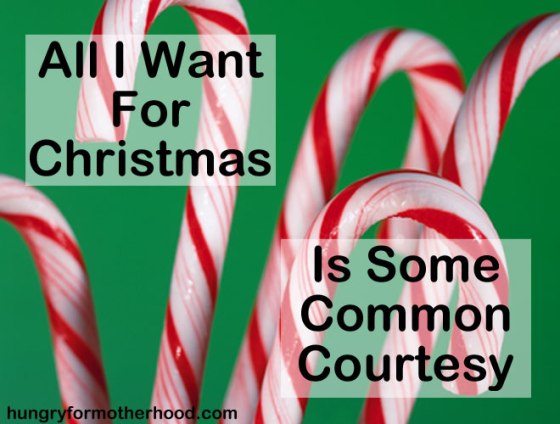 I try not to make this a blog full of bitching. Though I’ve been known to air my opinions a time or two. And maybe right now it’s just my rampaging hormones that drive me to this rant. Honestly, everything I will write about can be summed up in three words. People are rude.

Is it wrong that I expect a little more of people this time of year? That we should slow down, smile more and use our damn turn signals regularly? I don’t think so. So I’m going to hang these three people out to dry on this post that they will never read and, if they did, would have no idea it was about them. 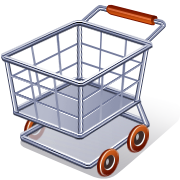 So a couple of weeks ago, the husband and I were at Target purchasing gifts for the children of a couple of our friends.  On the way to the registers, a woman pushing a cart with her daughter in it nearly ran my 20-some-week pregnant ass down. Hey, it happens. I know we sometimes forget to check if there’s oncoming traffic. Maybe her daughter had just asked her a question. Maybe she was looking down at her cell phone. Whatever. I was happy to give her the benefit of the doubt. Because it’s Christmas, dammit.

Now the store was not exactly packed, but like all major retailers these days, there were only six lanes open at the registers. And they all had lines. My husband and I picked one (far away from the wayward cart driver) that looked like it might move quickly. And then another register opened. No waiting. So my husband I started toward it. The cart driver with daughter in tow saw the opening too. And saw us moving toward it. So like any holiday shopper, full of cheer and the spirit of the season, she took off as quickly as possible to get there before us.

At this point, my husband was ready for a confrontation. I stopped moving toward the open register. Seriously, if I am going out in a Target during the holidays, it will have to be for something more worthy than a spot at the empty register. I mean, it should be epic, like a fight to the death with an elderly lady over the last Tickle-Me-Elmo. My husband was already upset about the almost accident in the aisle before we reached check out. He wanted that spot at the register. But I called him back. And he came because I was near tears at this point.

We went back to our spot at the other line. And I kept myself from going into hysterics over this crazy woman, and my husband’s lust for vengeance. And that should be the end of the story. But no. No, it’s not the end because as I was swiping my card through the little machine, I happened to look up. And you, crazy cart lady, you were looking at me with the smuggest expression you could muster. You were so damn pleased with yourself that you not only tried to kill me while shopping, you also cut my husband off at the pass.

You were PROUD OF YOURSELF. And I find that despicable.

Okay, so a few days later I was at the gas station at 5:30 in the morning. The car apparently doesn’t run on magic and holiday spice. Now, not everyone does this, but I think it’s another facet of common courtesy. If I decide after pumping my gas that I want something from inside the gas station, I will move my car away from the gas pumps and into a normal parking spot.

So often at this gas station, people will be waiting behind empty cars at gas pumps because someone ran inside to buy something after they were done pumping gas. And sometimes, there’s a line in the gas station that will keep you five to ten minutes. So that pump is inaccessible to everybody for that amount of time because that person had to get a doughnut or coffee.

I didn’t want to be that person, but I did want a doughnut. So I finished pumping my gas and started my car up to move it into a regular parking spot. At 5:30 AM, in the dark and the cold, around the holidays, you would think that people would drive cautiously. Maybe someone is about to pull away from the pumps. Perhaps you should make sure no one is going to move before you come through a parking lot at 40 miles an hour.

But not you, trench coat man in your burgundy SUV. Not you.

You came off the road, through the entrance to the lot and straight into the parking spot only seconds ago vacated by yet another SUV. You did not even take a gander out of your windows to see if one of the cars at the pumps was already in motion.; set to intersect the path you had chosen without checking in. Thank goodness one of us was watching at least.

But hey, it was early. Maybe you weren’t completely awake. Maybe normally you are a very careful and considerate driver. I pulled into the parking spot next to you just as you were getting out of your SUV. I was willing to believe that the person who stepped out of that careening car was normally a very nice person.

However, you stepped out of your SUV with so much grandeur and panache that my allusions were completely wiped away. You made a huge point of swirling your trench coat around yourself with pomp. And when you locked your car with the key fob, you had to do it ostentatiously. The way I would imagine Justin Bieber locked his 403 horsepower chrome plated 2012 Fisker Karma.

I think it’s safe to say that you think well of yourself. Not in the least bit ashamed of your terrible driving. Was all of that necessary to purchase your $1.99 gas station coffee?

You, sir, are despicable.

And finally, this is a co-worker that I have not been able to identify. I won’t spend any extra energy trying to figure out who did it. Because hopefully, in this case, I was able to make enough of an impression that it won’t happen again. Maybe. Or the entire office just thinks I’m crazy and hormonal. But it was worth it.

So you, unidentified co-worker, you watched a pile of boxes grow outside of my office. The supply closet was being relocated. While construction commenced, supplies were kept outside the work area. Sure, some of the boxes appeared to be empty. But most of them were either full or half full of supplies.

Now, we all know that if you have a box you need to recycle, the appropriate place to take them is to the entry way in the back of the building downstairs. This is where the large blue recycle bin lives. It is very happy to take those broken down boxes off your hands and hold them while we wait for the recycle pick up. However, you unidentified coworker, you decided that walking downstairs was for losers. And there were so many boxes outside of my office no one would notice just one more.

Your “just one more” happened at least twice. You threw your empty boxes on top of the pile for me to deal with. Because you didn’t want to walk downstairs. You would rather let me handle it for you. That’s so sweet.

I let it slide for days. But when construction was done, my intern and I moved all those damn boxes into the closet. And we broke down and recycled all the damn empty boxes you left for us as well as all the boxes we emptied. The suite outside of the closet was finally neat and tidy. All the boxes were downstairs where they belonged. I took a breath.

But the next morning, I walked toward my office only to find that you liked your new little habit so much, you had decided to place an empty box in the now cleared area. Really? REALLY?!

So as you can see by the picture above, I decided to announce to the entire staff that the second floor was not the place to leave your boxes. You can throw paper into the recycle bin upstairs, but we all know that boxes belong downstairs. And I didn’t lug my pregnant ass up and down stairs for eight hours the day previous for you to start the tradition up again.

So far, no other boxes have shown up. And I hope it stays that way. Because people who think nothing of loading extra, unnecessary work down on others, are…. despicable.

WOW! I feel a lot better. I know it’s silly to rant over things that I can’t change. I cannot control the behavior of others. But just this once, I’m going to comment on it. And doing so soothes me. Yes, maybe I’m angry because I’m cranky, hormonal and getting pretty big from the pregnancy. But these are things that would give me pause at any other time in my life too. So excuse this rant, gentle reader. I won’t write posts like this all the time. Promise.