New Year’s was spent quietly with a few friends.  No incidents.  No strange resolutions.  Just played Cards Against Humanity.  Which you should really play, it is a hoot.  Especially with good friends and a few drinks.

Then my husband went to a four day festival, and I was left to my own devices.  Which was fine with me.  I got my groove on!

I got my groove on so hard, that I fell off a stage at a night club.  Busted my elbow.  Gave myself the largest bruise I can remember ever giving myself.  And having to leave the club because I was bleeding on the dance floor.  Go ahead–tell me that I’m obviously not ready to be a mother because of my pathetic behavior.  Because I will respond to your comment.  It’s the kind of mood I’m in.

Then my hubby comes back from from his festival with the plague.  Not only did he throw up seven times, a day later he gave it to me.  4 PM to midnight Wednesday, January 10 will stay with me forever.  Barfing once an hour at least is just not how you should start a new year!

To top it off, we also had our final visit with the reproductive endocrinologist on Wednesday.  She thinks during our NTNP break, we should seek out counseling   And since the fertility meds affect me so much emotionally  that I should consider taking anti-depressants in combination with the meds.  To be fair, this is probably good advice.  Just not what I was expecting to hear.

So as I rehyrdate, I can only think about that Alice in Wonderland song, I Give Myself Very Good Advice.  But I very seldom follow it.  Once I’m back in fighting form, I’m sure I’ll feel better about the situation.  But right now, just look at this bruise! 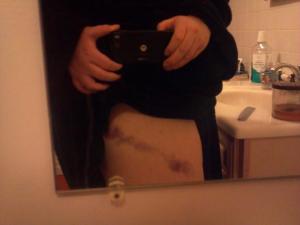