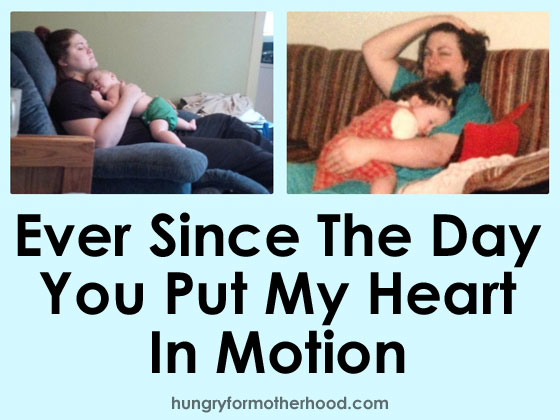 My mother had a great music collection. I would sit in front of her CD organizer and re-arrange the discs so many different ways. Sometimes all the holiday records together. Sometimes by the year they were released. Sometimes by the first letter of the artist’s first name; sometimes the last name. Genre, color, etc.

And I listened. A lot. For a while she had a subscription to a CD service that would deliver a new disc every month full of 1970s hits. God, what were they called? Songs of the 70s? I can’t remember exactly which is surprising considering how often I listened to “Werewolf of London” and “Hot Rod Lincoln.”

This song popped up in my YouTube subscriptions as soon as I turned on my computer. There was a half moon in the sky this morning. And as I listened to this decidedly more calm and almost somber cover, I really listened.

The relationship she describes begins in one direction. The singer feels her heart didn’t start beating until the day she met the person the song is about. And maybe because I associate my mother with the song, I always felt that she was singing as a mother to a child. (Just looked it up and yes, Amy Grant was singing to her daughter, Millie.)

Now, years later I realize just how true this is. I feel like a part of my life came together thanks to Gibson. He lights up everything. Sometimes it does feel my heart beats only for him.

It’s only now that I realize, it cuts both ways. My mother literally did put my heart in motion. I wouldn’t exist if she hadn’t given me life. And I got teary.

I think about how I’m going to feel as Gibson grows into his own man. Traveling on his own like my friend’s daughter who just started as an exchange student in Finland for a whole year. Going to college like another friend’s little girl/full-grown woman who just started her freshman year at a college about 10 hours away from home.

Maybe it will be different in a few years when Gibs is so independent. Maybe I won’t feel like a part of me is missing. Maybe I won’t mark the passing of time with tears and sobs, but celebration and margaritas. But I don’t think so.

Along with regularly “cursing” me with incantations such as “I hope you have one just like you,” my mother would say “someday you’ll understand.” And now I think I really do. It really is like a part of myself walks outside of my body and that part is contained within Gibson. I can’t control what he does with that precious piece of me. It is his to keep forever. And he doesn’t even know he holds it.

I know that a mother never expects their child to feel like they “owe” her. I wouldn’t want Gibs to walk through his adult life feeling somehow indebted. I want him to be as happy as possible doing what he wants to do. And I hope he calls me on Sundays.

However, I think it would have been gratifying for my mom if she’d seen realization dawn on me. That what Gibs does to my heart, I did to hers. When I moved to Japan, I’m sure she was heartbroken. Proud, gratified, happy but also heartbroken. And me, so naive to what she felt. But I just couldn’t have known or understood.

I think she would have enjoyed watching me turn into a mother. Not because she wanted me to suffer, but because she and I would have understood each other on a completely different level.

Even though she’s not here in the flesh, I like to think she’s here in spirit. Every time Gibs does something amazing, which seems to be practically everyday, I think “Dammit, you’re missing this.” But maybe she isn’t. And maybe she isn’t missing seeing me grow along with my son.