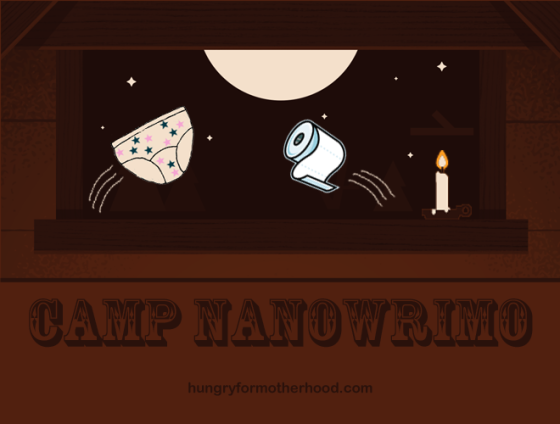 Okay, I know my 52 Week Short Story Challenge hasn’t really turned out like I planned. Time management with baby is a skill I’m still perfecting. So I’m tabling that project this year and picking up something a little more manageable. Or at least, I hope it’ll be manageable. I’m going to participate in Camp NaNoWriMo! It’s a less known version of NaNoWriMo run by the same good people at The Office of Letters & Light. Sorta NaNoLite.

The best part is that I have complete control over my word count. And it’s totally encouraged to go “rogue” with your style. Instead of just 50,000 word fiction novels, you can try your hand at scripts, non-fiction, poetry, short stories or even just do a revision of a novel you’ve already written. I love the idea because it gives me a way to stay in the writing game without the huge goal of 50K staring me down like it does in November’s NaNoWriMo. I love the pressure though, don’t get me wrong.

Actually, I’m not going to sweat it. I manage 50K in 30 days. This is 1/5th the number of words in the same amount of time.  Instead of writing 1667 words a day, I just need to put 334 words down. Hell, that’s less than an average blog post for me. That’s like a lengthy paragraph. Actually as of this sentence, I’m already at 286 words just in this post. So you know- totally doable.

Anyway, my screen name on the Camp NaNo site is kbeno. Look me up. I just got into a swanky private “cabin” with some of my best writerly (in real life) friends. We’re the cool cabin because we’re unisex. And as we know from Ally McBeal, having a unisex facility is super sexy.

Also sexy? I’m giving script writing a shot. My grandfather used to work in special effects in the California movie industry. He has seen some terrible scripts and, in the past, has encouraged me to try writing and selling one. Because some of the stuff that makes it to the screen these days is just awful. And I mean, I can always give awful a shot!

I’m torn between writing a romance script with a love triangle or writing a thriller set post apocalypse. Yes, I know. Both have already been done. Any number of Adam Sandler/Drew Barrymore movies or Terminator/Asteroid/ Zombie movies could be cited in making the case for “it’s been done.” Thankfully, I don’t care. At least I’m trying!

So if you’ve got a little down time this summer (or even if, like me, you don’t) consider signing up for Camp NaNoWriMo this year. We start our pens flying on July 1. Be there or be square!

Oh, but fair warning: we totally intend to do a panty raid and teepee the other virtual cabins. Cause we’re awesome! Get ready other campers!

One thought on “Camp NaNoWriMo”