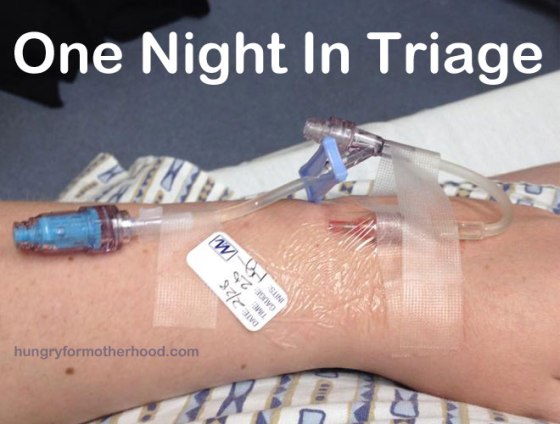 So, you have one bad day at work, and the next thing you know you end up in triage at Labor & Delivery because of high blood pressure. At 38 weeks of pregnancy, that’s what happened to me. Didn’t matter how I explained it to the doctor, but with multiple readings in the 140/95 range she wasn’t having any of it. Off to triage I went for a non-stress test.

Strangely enough, this did little to lower my blood pressure. 😛 After I picked up The Man and had something to eat we arrived at triage with me in the 160/100 range. The nurses’ eyes were bugging out of their sockets. And when they decided that they should go ahead and put in a hep lock just in case I was admitted, I stayed in that too high range for quite a while.

It wasn’t until The Man and I were left alone in the room, and I could play my guided imagery visualization mp3 that I manged to bring my blood pressure down into the 130/70 range. Thankfully as a result of that, the doctor decided to send me home.

However, because of that one incident I’m now on some kind of watch list. After that Friday night escapade, I had to return for another non-stress test on Sunday morning. And another one on Wednesday morning. Each one of these tests could end up with my being induced if the doctors see something they don’t like.

My fear of being induced is that it will lead to a C-section. I’m trying to get my labor started more naturally with the help of some herbal remedies. The most classic that I’ve read about are Evening Primrose oil and Red Raspberry Leaf tea. I also plan to try fresh pineapple, dates, eggplant and, of course, exercise. Well as much exercise as I can take. And, of course, there’s also good old fashioned sex.

At 38 weeks, I was not dilated in the least. Though the doctor did think I might be 50% effaced. Unfortunately, other than my normal Braxton Hicks, I haven’t seen any other signs. Like bloody show or any part of my mucus plug. Gibson seems very comfy and not interested in busting out any time soon. But if they are going to try to induce me in the next couple of weeks, I’d like to avoid starting with a cold engine- if that makes sense.

Thankfully, the tests have proven that Gibson is doing really well. He meets all the criteria for a healthy, happy (albeit a bit large) baby. Though large for a couple of six-foot-tall parents is relative. We’ve already established that I have gigantic hips so I’m not too worried that the 37 week ultrasound placed him at about eight pounds already. I have a cousin who was almost nine pounds when he was born and that was a vaginal delivery.

You can bet I’ll be using my guided imagery meditations often in these last two weeks. Gotta keep the blood pressure down. My goal would be for labor to start naturally before the doctors decide to induce. The more they monitor me, the more chance there is that they’ll find something they don’t like. *sigh* But it’s better than ending up with pre-eclampsia, I suppose.

7 thoughts on “One Night In Triage”