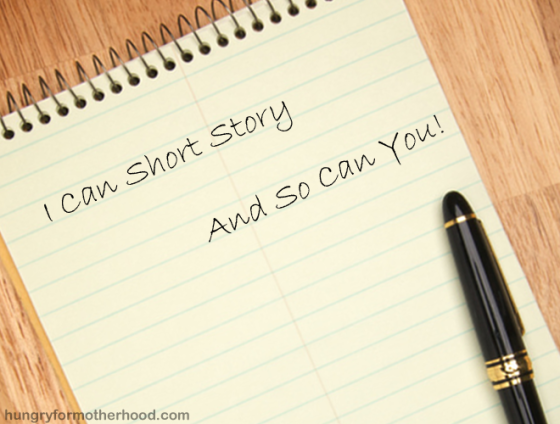 When I posted last week about my intent to participate in the 52 Week Short Story Challenge, I got a lot of positive responses. But, heartbreakingly, I also heard from fellow writers who felt they could not possibly try something like this. They don’t have the time. They are already over-committed on their writing. Or they can’t work it into their schedule.

*sniff* Heartbreaking I tell ya!

So in this post, I’m seeking inspiration. And as anyone who was exposed to Schoolhouse Rock! knows, knowledge is power. Thus, research.

What is a short story? According to Wikipedia, it’s “a brief work of literature, usually written in narrative prose.”

So what does brief mean here? From what I’ve read it’s anything between an anecdote and a novella.

Well what does that mean?

I think it means that a short story is any damn thing you want it to be. And if that’s the case, how can you lose?

A six word account about baby shoes can be considered a full story. Telling you about the time I threw a rubber snake into the shower while my sister was in there could be a short story. Telling you about the time she left me in the creek to face down a water moccasin by myself thanks to the crippling fear I instilled in her during the shower episode could be part of the first story or stand alone as its own story.

Six words, three paragraphs, seven pages or seventy pages. A short story can be pretty much any length. And all you have to do is try.

Okay, you need more substance. You want parameters to guide you. Fair enough. Not all writers like winging it. I can understand that. We look again to Wikipedia.

“At its most prototypical the short story features a small cast of named characters, and focuses on a self-contained incident with the intent of evoking a “single effect” or mood. In doing so, short stories make use of plot, resonance, and other dynamic components to a far greater degree than is typical of an anecdote, yet to a far lesser degree than a novel.”

How’s that? Instead of working out a long piece that covers weeks’ or years’ worth of events, you write about that one thing that happened that one time. You don’t worry about taking the character(s) through a huge range of emotions over the course of a journey. It’s one moment. One hour. One day.

And because you’re practicing, eventually you’ll be able to take these limitations and somehow work plot and resonance into something as brief as your short story. So you only stay with the character during the time he places his ad for baby shoes in the local newspaper. You only know about the two sisters in the moment when one pranks the other. You only feel the panic of the girl alone in a creek with a snake at her feet for the minutes she spends figuring out how to escape her situation unscathed.

So what if your first story sucks balls? And your second. And your third. By July of next year you might actually find that you’ve accidentally written something that doesn’t make you shudder in disgust when you read over it. And by the holidays, you might even let someone else read what you’ve written. By 2015 you might find that sliding into writing a novel after a year of short stories comes so easily you’ll wonder why you never did it before. And that novel might have found its beginnings as a lowly short story you dreamed up back in March. You know, the one you seriously considered deleting in case your untimely death led to your family members stumbling upon it and reading it at your funeral. Now it is the seed that grew into your Great American Novel.

I guess all I’m saying is, what’s the harm? You never have to show your writing to anyone. You never have to admit to anyone that you are trying to write a short story a week. I personally need the accountability of people asking if I’ve written my story this week. You don’t have to be the attention whore I am. The only thing that might change your life here is that you accidentally write something good. And then write something else that is also good. So good that you start to believe your writing is worth reading. What’s the harm in that?

Okay, okay. How about I give you a list of short stories that are considered to be exactly what a short story should be? Maybe read one of them before you give this a go. Or maybe you’ve already read one on the list (or watched the movie adaptation.) If that author could do it, surely you can too!

“I, Robot”, by Issac Asimov
“Steps”, by Jerzy Kosinski
“The Celebrated Jumping Frog of Calaveras County”, by Mark Twain
“The Secret Life of Walter Mitty”, by James Thurber
“A Sound of Thunder”, by Ray Bradbury
“The Three Questions”, by Leo Tolstoy
“Brokeback Mountain”, by Annie Proulx
“Do Androids Dream of Electric Sheep”, by Philip K. Dick

Fine. You want a step by step guide on how to write a short story. You got it. But seriously, that’s all I can give ya. Just like art, there is only so much you can learn from a classroom. To really learn it, you have to do it.

Today is New Year’s Eve. A time for drunken promises forgotten by the light of the next morning. Why not make this promise to yourself before you start in on the Jägermeister? If it vanishes at dawn when your hangover begins, then so be it. But if you wake up next to someone that you think might be named Tiffany, maybe take a moment to note the state of the room and her tangled hair against her naked back before you beat a hasty retreat. That could be your first short story of the year. The first of fifty-two.