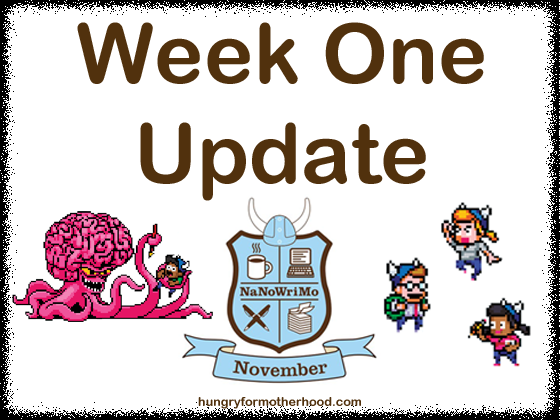 Since it’s November, I thought I’d do a weekly update on my progress during NaNoWriMo. If you want to join in, you still have lots of time to catch up on word counts. National Novel Writing Month is something I think every person should try at least once. It will expand your mind, and you can walk around all cocky-like declaring your new status as a novelist. At least, that’s what I intend to do on December 1st. 😀

As you can see in the light blue widget above, I am cruising right along. The widget will change as my word count goes up, so I’ll refrain from listing an exact number in the body of the post. But for reference, on day 7 of NaNoWriMo, you are supposed to be at 11,666 words before midnight. So I’m a little bit ahead of that as of this posting.

And boy will I ever need the buffer, because Week 2 is always my albatross. The effects of Week 2 in NaNoWriMo have been well documented. You’re about a quarter of a way through your story. The initial exposition is written, and the action is probably in a bit of lull. You start wondering why the hell you wanted to write a novel at all. The characters all seem thin and pointless. The plot now feels like it’s plodding along. It’s really the doldrums of NaNo to borrow another historical maritime phrase.

I can already feel Week 2 coming to steal my enthusiasm for this novel. This morning I had to resort to word count padding to reach my goal of 1667 words today. Like any good, sleep deprived WriMo, occasionally you find you need to add something to the story that you know will have to be cut out in the editing process. This morning, my stoner character took a bong hit and contemplated the universe. He thought maybe he was actually trapped in a hastily and not very well written novel. And that God might actually be a woman named Kristin.

See? That kind of writing is indicative of Week 2. So next week, when I actually update you on what happened in Week 2, you can expect some similar recollections. Though I think I might have already jumped the shark when I made my character get naked and roll around on a pile of money on his bed. Well, at the time it seemed like something a 21 year old would do with a windfall of money. You know what? I’m not going to defend that. Or anything else I write. Thankfully, I’m writing for me and not an audience.

That said, I will leave you with the opening to Chapter One of my in progress novel- Burning, Man! (Because I feel like you deserve to see what I’m doing if I’m going to continue to urge readers to join in.)

The scratching noises were getting louder. They had been easy to ignore for a while now. Sometimes getting annoying enough to make Jeffrey Cambridge snort in his sleep and turn over, but never enough to really wake him. However, now the sound of nails against the concrete foundation of the house were really getting on his nerves.

Opening his eyes slowly, Jeffrey brought a yellow stained hand to his face and rubbed the sleep away. How long had he slept? Why were there scratching sounds? And why did he have his dick in the other hand?

A glance at the clock told him that it was about noon on a June day. The humidity would be thick as mud in Palmyra, Indiana. Not that the time mattered, really. Since he was unemployed, Jeffrey had nowhere he had to be. What to do first?

But the scratching was still incredibly loud. Jeffrey found some pants on the floor, picked them up and smelled the crotch. Turning away in disgust, he ambled over to the closet in his preferred sleeping ensemble- his birthday suit. Finding a cleaner pair of pants, Jeffrey left his basement apartment and headed upstairs to take care of the noise.

P.S. You can also follow my word count any time by taking a look at my Writing page. Or by joining NaNoWriMo and adding me as a “buddy.” You know you want to!