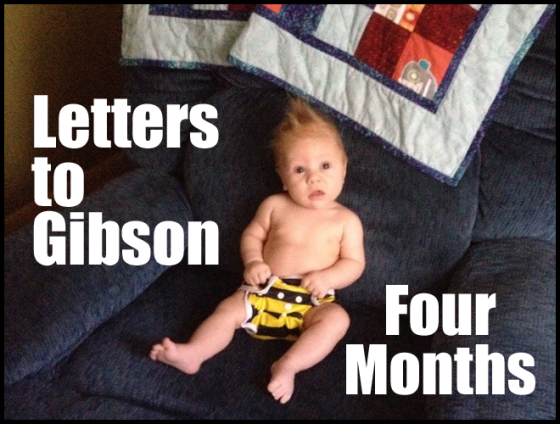 You have grown SO much in only a month. No wonder you’re hungry all the time! You have just reached a point in your development that I can no longer only give you milk or formula. You demand some cereal with your bottle.

I wanted to wait until you were a true four month old before introducing anything like a solid, but your great grandfather convinced me that your near constant agitation was from hunger. And when your family tells you that your baby is hungry, you tend to listen. So we gave you about a tablespoon of cereal in your bottle, and you slept for four hours in a row- finally sated.

This is another moment of mommy guilt I must contend with. I fed you as often as you seemed to want, but it just wasn’t enough for your dietary needs. The guidelines nowadays recommend no solids until at least four months. Other organizations recommend waiting until six months. And I want to do right by you so much. But ultimately, only you know what you need. It’s my job to listen to you… and take the doctors’ advice under consideration while giving you what’s best for you.

So further up and further in. I brush off this learning experience in favor of providing you with another. Swimming lessons. Yes, you were only three and a half months old the first time you entered the pool. Apparently, there’s research to suggest that babies as young as six weeks can benefit for swimming lessons. I like to think that you enjoy the ability to move yourself around a bit on your own. But in actuality, you seem to enjoy the first fifteen minutes of the lesson and then you’re so tired, all you want is to be dried off and fed.

At your very first swim class, you were totally fine with letting your face touch the water for a second. And by the third class, you let me keep you floating on your back with your ears under the water. You naturally kick in the water as I pull you around. I was starting to wonder if we should keep you in swim classes as I wasn’t sure you were getting much out of it. But on the 4th of July, we went to your Auntie Nikki’s house for swimming shenanigans, and you did great! So maybe it’s worth continuing your lessons for now. 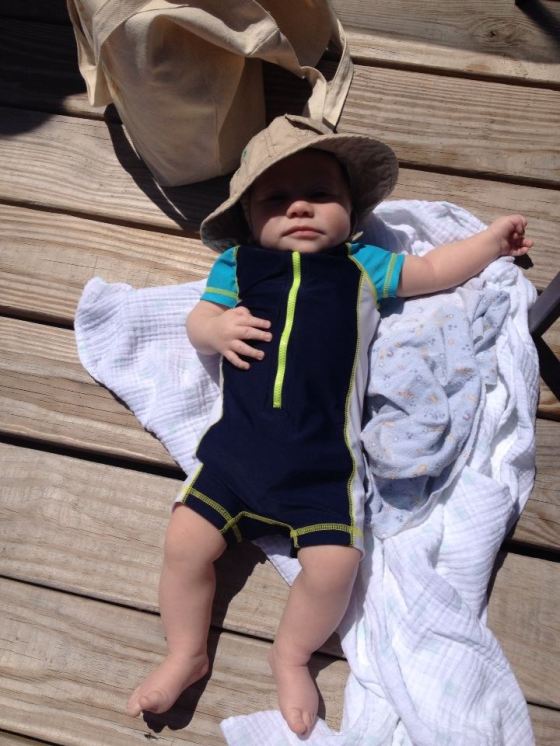 Speaking of Independence Day, you had your first really noisy night to contend with. I mean, it’s not The World Cup in Brazil- but you can hear fireworks all around until at least midnight in our neighborhood. Thankfully, the white noise machine drowned out a lot of it, and you managed to get some decent sleep. You also got to enjoy an evening spent around the fire pit in the back yard.

The fire pit is sort of an emotional touch stone for me. Your father built it for us as a ninth anniversary gift. And just was we were buying supplies and laying out the design, we found out that we were expecting you. July 5th is the day exactly. (Convenient since that’s also your buddy, Bjorn’s, birthday!) So it was very sweet to know that the fire pit was a twinkle in our eyes at the same time you were and now we can all use it as a family while you are growing.

And finally, another thing that came up this month: more family! You met your maternal great grandfather, Lambert and your grand aunt, Theresa. 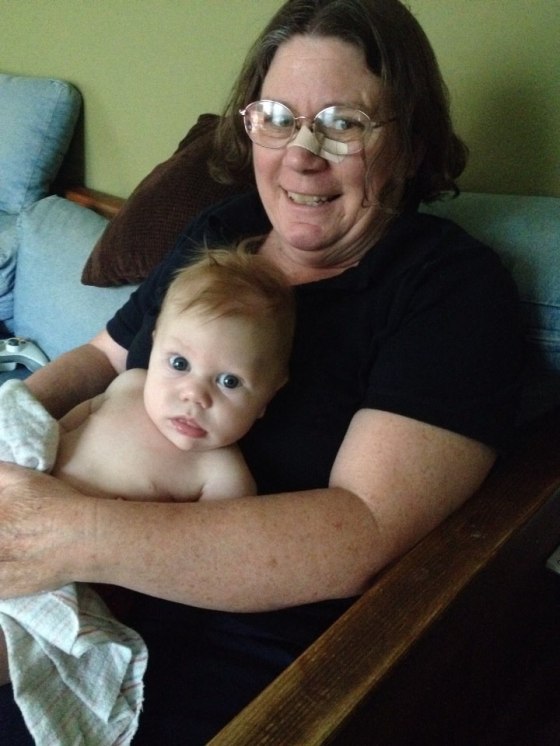 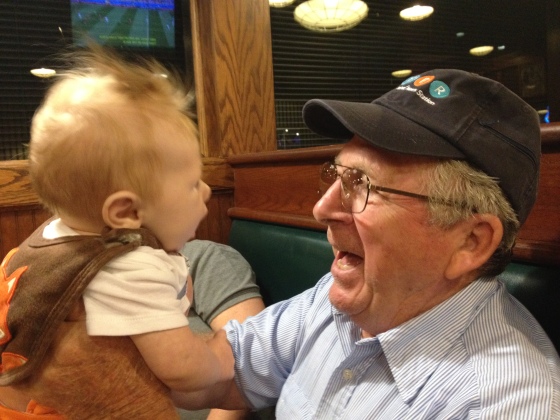 If I were going to sum you up right now Gibs, I’d describe you as racing, rushing and roaring forward. There’s no stopping you now, son. Now that you’re eating cereal and swimming and reaching out to grab things, you are becoming more and more your own person. The lid is off the lamp and the genie is out of the bottle. Even though you’ll always be my baby- you are doing your damnest to become less baby-like everyday.

You can flip from your stomach to your back. You can shove things into your mouth. You’re trying really hard to even hold your own bottle. This grasping towards independence is hard on your poor mom. I was just getting used to you needing so much from me, and now you’re attempting things on your own. The next thing I know you’ll be crawling and chewing on electrical cords!

Thankfully, I do know that you while you may not NEED me constantly anymore, you PREFER to have us around. Sometimes when I’m busy stuffing diapers or making dinner, you’ll give a cry purely to get my attention. As soon as I look up, you’re all smiles again. If I watch your process through my eyelashes so you think I’m not looking, I see you watching me, then frowning, then cueing up the cry. If I snap my head up to catch you, ALL SMILES again. You little stinker, you. 😀

All this racing and rushing and roaring takes its toll though. Sleep is something we’re still working on. As in, trying to get you to sleep when we’d also like to be asleep. It’s hit or miss. We have good nights and bad nights. But the older you get, the more good nights we seem to have. Especially now that you are eating some cereal before bed. Even though we’re all pretty sleepy, we still make an adorable family.

I love you,
Mom