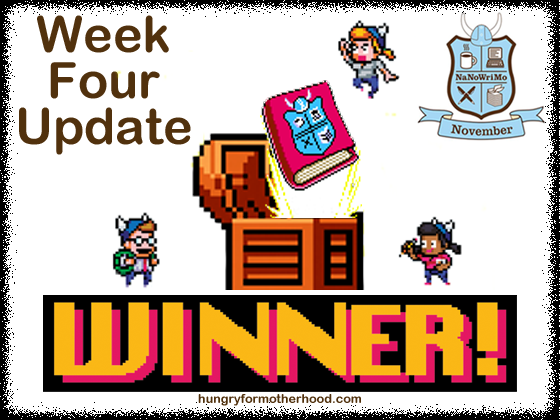 Maybe you’re reading this on the morning of Turkey Day (for Americans) or perhaps you have finished your feast and are propping your feet up with your laptop right now. Well either way, thanks for taking the time to read this little ole blog entry on Thanksgiving. This is the fourth and final NaNoWriMo update for 2013. And as you can see by the widget above, I have won!

Winning in this case means that I reached 50,000 words. Not that the story is done. Or even that the story is anything like good. In fact, if you want to know the god’s honest truth: I absolutely hate this book. But I bet a lot of novelists feel that way when they finish their books. You start out thinking that it will be this great masterpiece of wordsmithing. And by the end, you hate the plot, hate the characters and wish you had never started the damn book.

But that’s the kind of thinking that stops folks from actually finishing a project. The good thing about NaNoWriMo is that you have the support of other people who are in the same boat. You have a deadline, and you have bragged about the fact that you are participating in NaNo so much that you would be publicly shamed if you quit. Shame is a great motivator. And I have been VERY public about NaNo on this blog.

After I reached the word count goal and used the word count validator on the NaNo website, I, of course, was elated. More than anything, I was glad it was over. I think this has been my most difficult NaNo ever. Even with the exhaustion that comes with growing a baby, I somehow managed to wake up an hour early every day for 26 days and hit my word count (almost every day.) And I hosted four weekly write-ins (WriMo meetups) at the local library to inspire other folks to keep writing too. I am totally earning my gift from Santa this year!

So without further ado, I offer you my last writing excerpt.

An excerpt from the epilogue of my unfinished novel, Burning, Man!

Palmyra looked much the same as it always had. Dot’s bar was a little more updated with a new neon sign, but other than that, almost everything else remained the same. Jeffrey drove through his old haunts slowly, trying to feel nostalgia that was not coming naturally.

He was glad he had left Indiana. Glad he took off on his trip to the west coast. Happy he had met Tara and Zang. Relieved to find out that the rest of the world was not like this sleepy little town.

Jeffrey slowed down by Marty’s house. It looked the same, but he wondered who owned it now. And if they used any of the cameras that Marty had left behind. If they did, they might be staring at a screen writing down his license plate number at this very moment. He drove on.

Mr. Thompson’s house was still for sale. In this little town, everyone knew everyone else. And everyone knew that Mr. Thompson had died in that house. The only hope the realtor had was to demolish it and try to sell the property. But in the economy of Palmyra, it might still be an exercise in futility. Jeffrey’s thoughts went to Mr. Thompson’s oldest son and executor of his will, Bruno. He wondered if the son ever considered just keeping the house and moving to Indiana. Bruno could probably sell his own house faster wherever he lived than he could sell the little two bedroom here in Palmyra.

And, of course, Jeffrey had to stop and look at his mother’s house. Her car was not in the driveway, so he knew she was not home. Unless her car had been repossessed. It was a chance Jeffrey was willing to take. He wondered if she had changed the locks.

He knocked once, to give her a heads up that he was here. But there was no sound. If she was home, she must be sleeping off another hang over. He slipped the key into the lock and turned. It fit just like all the other times, the thousands of times, he had done the exact same thing growing up.

The whole house looked cleaner too. Something was definitely different. Jeffrey would have suspected she had sold the house if all her stuff was not still here. What if she had a stroke and now had in home care come in and take care of her? Oh that would be an awful thing to find out today. But Jeffrey pushed that thought from his mind and made for the basement. He needed to do what he came here to do.

Jeffrey gently placed the infamous pink bag that once contained cocaine and marijuana on the bed. Maybe someday his mother would come down to the basement for one reason or another and find the bag sitting there. Maybe she would remember that Jeffrey had taken it with him the night she had cut his arm. And in her inebriated state she might even be able to piece together that the bag’s reappearance means that Jeffrey had been in the house. He wondered what she would think of that.

Looking around the basement one last time, Jeffrey felt a sense of closure. That was all he ever needed to do here. He would never have to come back to Palmyra again. And good riddance. He carefully made sure to turn off the lights and close the door to the basement so his mother would not notice the intrusion.

In the kitchen, he was struck again by the cleanliness and order. The house had not been like this since Jeffrey was in grade school. Scanning the living room, something finally struck him. There were no bottles anywhere. Not one bottle of rum sitting on the floor next to the couch. No empties in the trash. Wait a minute, there was a recycling bin in the kitchen. Was Barbara Gillette becoming environmentally conscious?

Jeffrey looked in every cabinet for signs of his mother’s drinking habits. But he found nothing. Had those stupid pamphlets from Mr. Thompson actually worked? Had Barbara found Jesus while Jeffrey had been away? He was not sure what had finally clicked in his mother’s mind and made her stop drinking, but a well of emotion rose up in his heart.

Wait, a minute. What about the freezer? There was likely to be at least one bottle of booze in there. Maybe today had been trash day (or recycling day) and she was low on cash. That would explain the lack of bottles about the house. Yes, Jeffrey was just sure there would be an icy bottle of vodka in the freezer. But after pushing past the fish sticks and Lean Cuisine frozen meals, all Jeffrey found was the back of the freezer. No passage to Narnia and no alcohol.

Shocked, Jeffrey closed the freezer door. In his state, he took a moment to lean his forehead against the refridgerator. And that was when he noticed the slip of paper for the first time. It was a flyer for a play. Palmyra apparently had a community theater. Who would have known? And they were doing a performance of “Annie Get Your Gun.”

Jeffrey would have shrugged and turned away if he had not caught sight of the cast list. Playing Annie Oakley in tonight’s performance was none other than Barbara Gillette. He ripped the flyer off the clip holding it to the fridge. There was even a picture of his mother in full costume on the paper. It was grainy because it seemed to have been printed on a home copier, but there was no denying it was his mother. When was the last time he had seen her with a genuine smile on her face? Usually it was a drunken sneer. Her eyes looked so bright despite the picture’s low resolution and inferior printing.